Walking the ends of the Earth 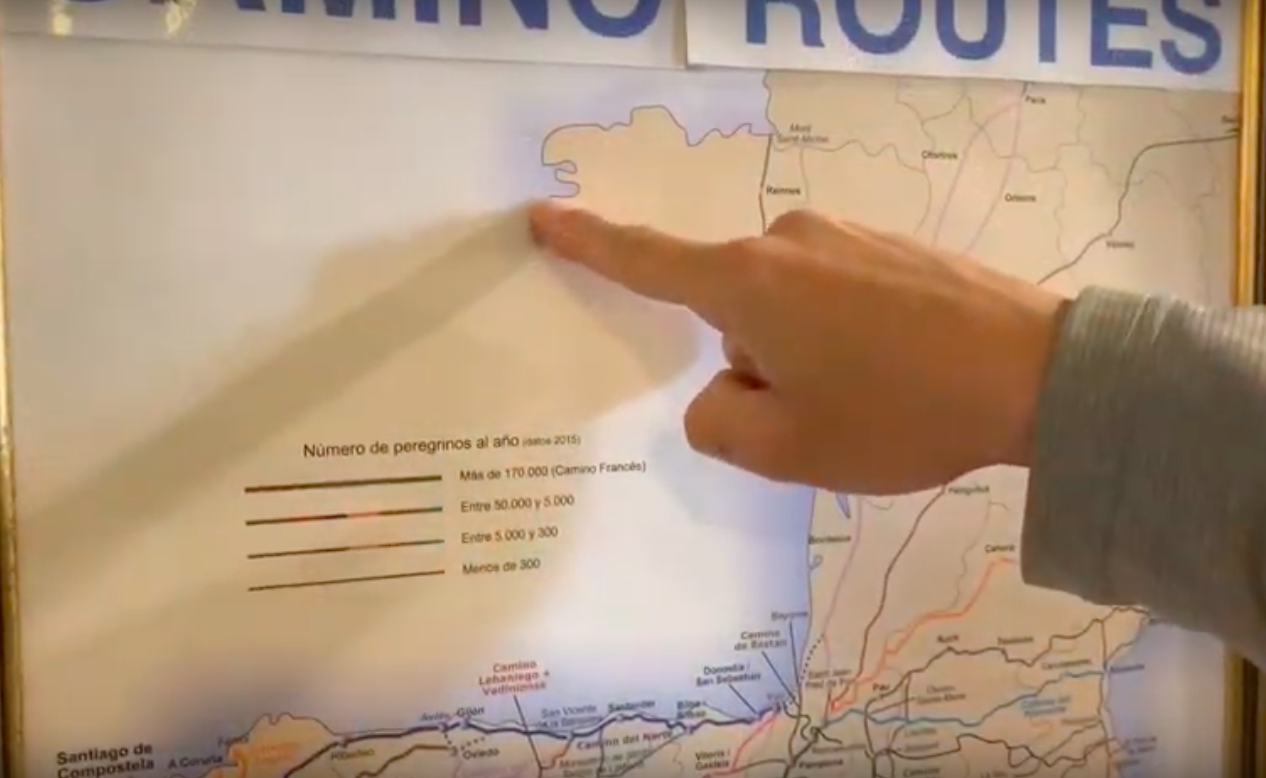 We were standing in the “Camino corner” of Glenella Guest House in Blackhealth, the Blue Mountains, staring at a map of the Camino routes through Europe when I said to Fi “Look, we could walk from one end of the earth to the other” pointing at Finistère in France and running my finger along different coloured routes to Finesterre in Spain. The Camino was calling again.

Now we just had to work out the practicalities to make it happen. In 2016 we completed the Camino Frances from SJPDP all the way to Finesterre so had a good idea of how long the Spanish chapter of our journey would take. However, the French chapter was literally stepping into the unknown. 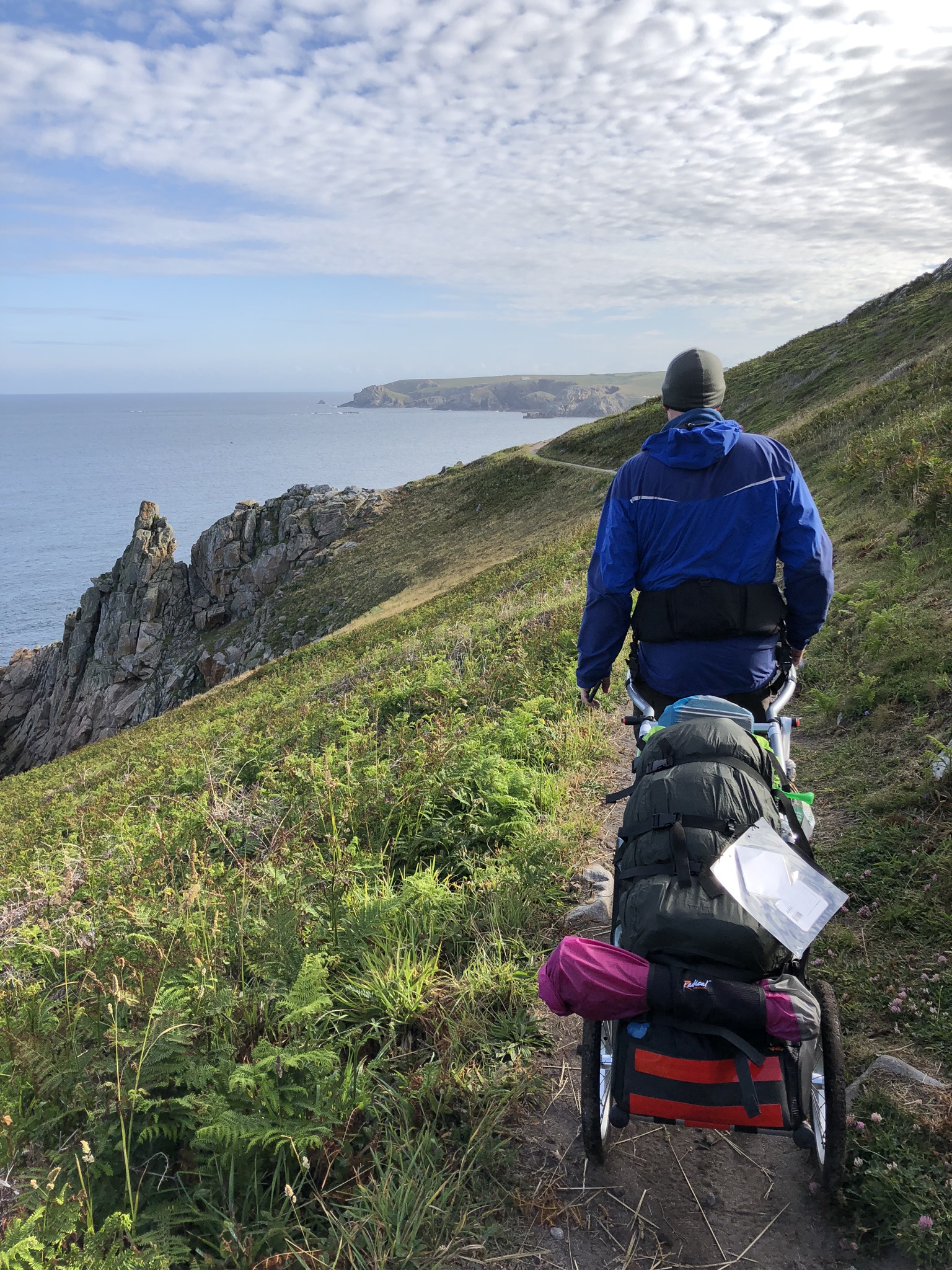 Finistère is a region of Brittany and we chose to start at one of its most westerly points, Pont Du Raz, a spectacular rocky outcrop into the Atlantic Ocean. I did my best to piece together a rough estimate of distance from the websites of each pilgrim association that maintains the paths. I calculated 46 days to complete the 1,160km French chapter to SJPDP. We later discovered I was rather optimistic in my calculations but that’s just part of embarking on a journey of this length and I would say the mysterious beauty of it too.

Australians are eligible for a 6 month French visa and we applied for 4 months under the category ‘visiting family’ as my French speaking sister has been living there for several years. Her help would prove invaluable on our journey. In June 2019 we flew from Sydney to the UK and started this adventure by celebrating my mother’s 90th birthday. I was reunited with many members of my family at the birthday party, and our open invitation to walk with us was picked up by my eldest sister, Julia, who would join us for part of the Spanish chapter in a couple of months time. We were excited to finally start walking and dedicated this pilgrimage to my parents.

Not knowing what the pilgrim infrastructure would be like in France, we had purchased a walking trolley to carry tent, food and extra water. With butterflies in my stomach, Fi and I set off on the first day of our walk across France, trolley in tow, along steep cliffs with fantastic views of the ocean.

Since our plan was to walk from coast to coast, we had to find a trail to connect with the official route of The Way of Saint Matthew at Pont-Croix, which was 24km inland from where we set off. This proved quite a challenge as there were no trail markers to follow and the path was overgrown. Because of the uneven trail, when one wheel of the trolley lifted, the handle would hit my thigh and after a few hours I became bruised and quite sore. Of course, being male, I didn’t say anything until I couldn’t take it anymore. Then Fi, being female, had the bright idea of pushing it instead. And so, after 9 hours we eventually made it to Pont-Croix and stayed in a B&B found on booking.com. 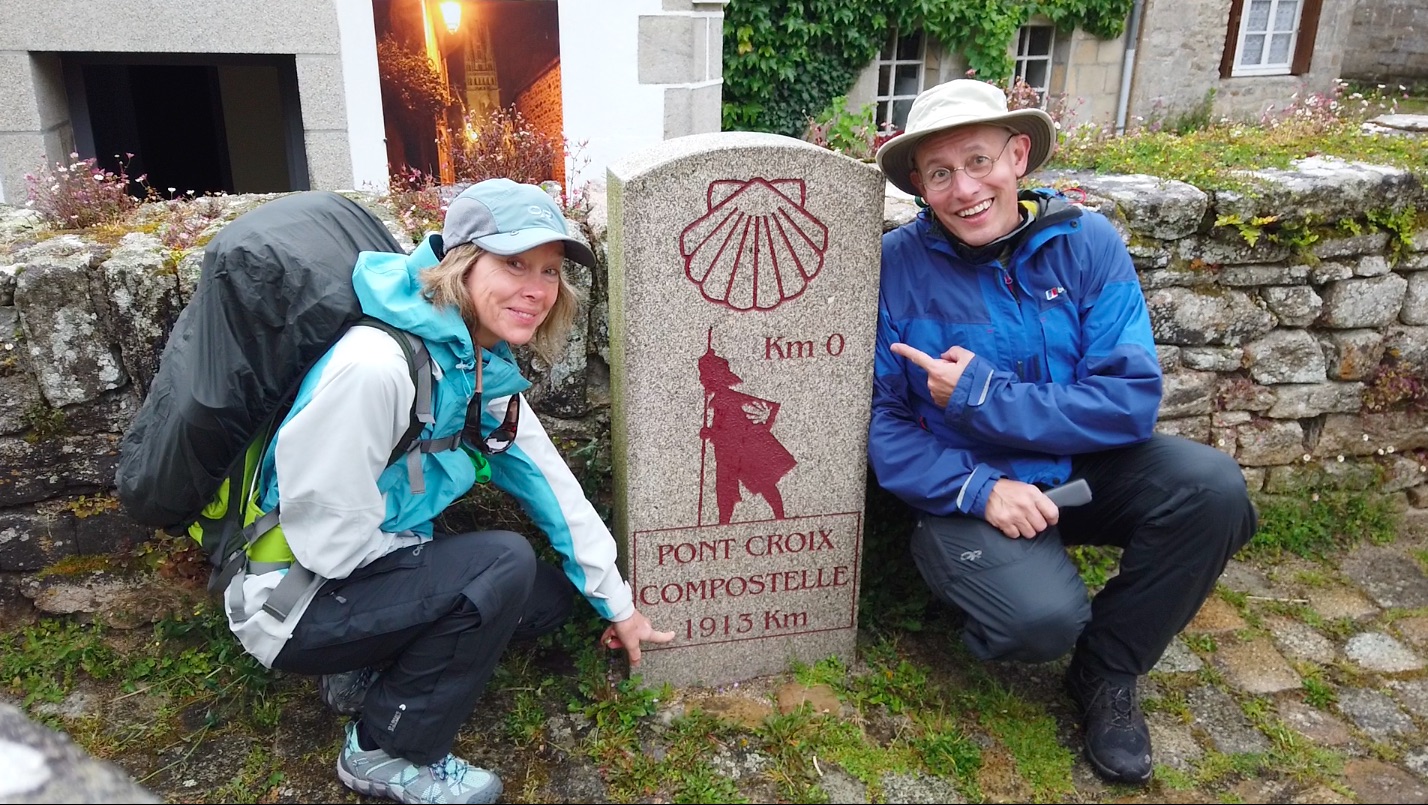 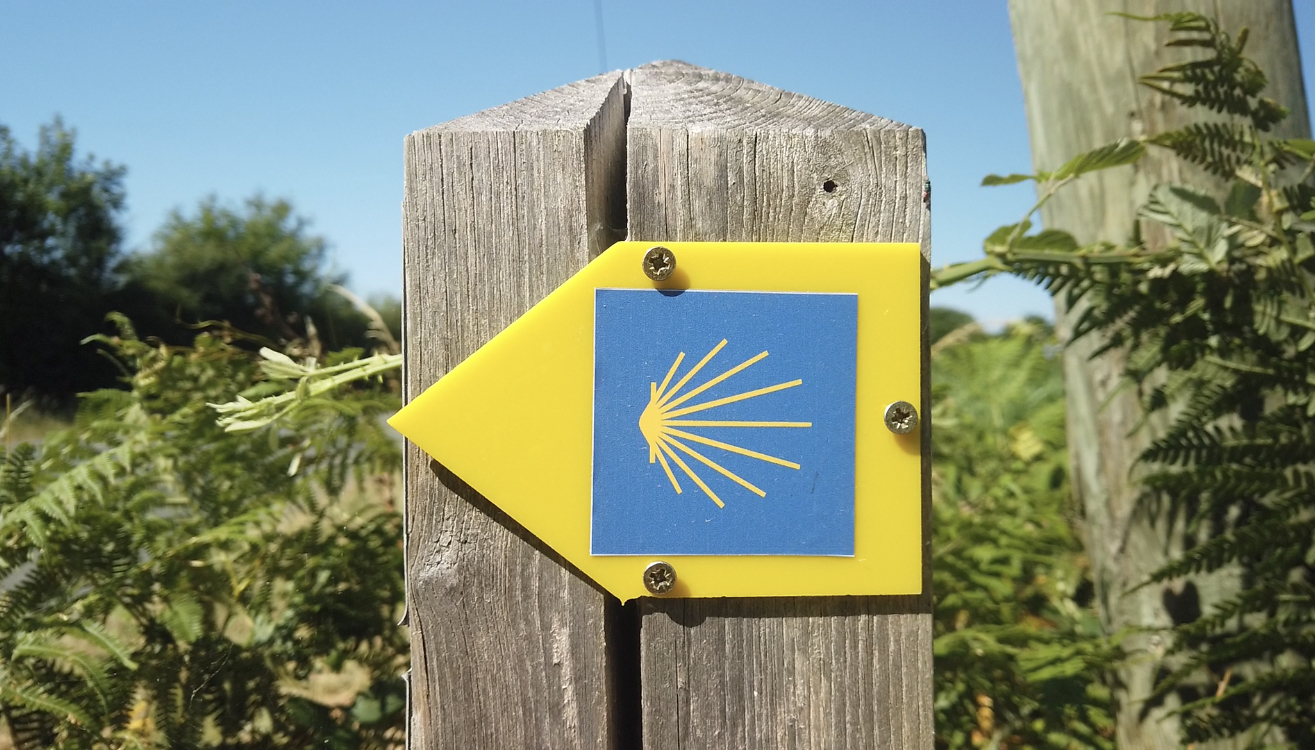 The Camino markers in France are different to those in Spain - they are only at intersections and are either a 5cm blue square with a shell symbol pointing the direction, or a yellow and blue stripe indicating straight on, left or right. A cross ‘X’ indicates don’t go this way. Markers can be on the back of road signs, trees or fence posts, and are sometimes hidden by plants. You need to stay alert because they’re easily missed, but generally speaking the way is well marked. The trails from Pont-Croix were well maintained and thought out. We were kept off busy roads and directed through forests, along river banks and canals, through fields and farmland. 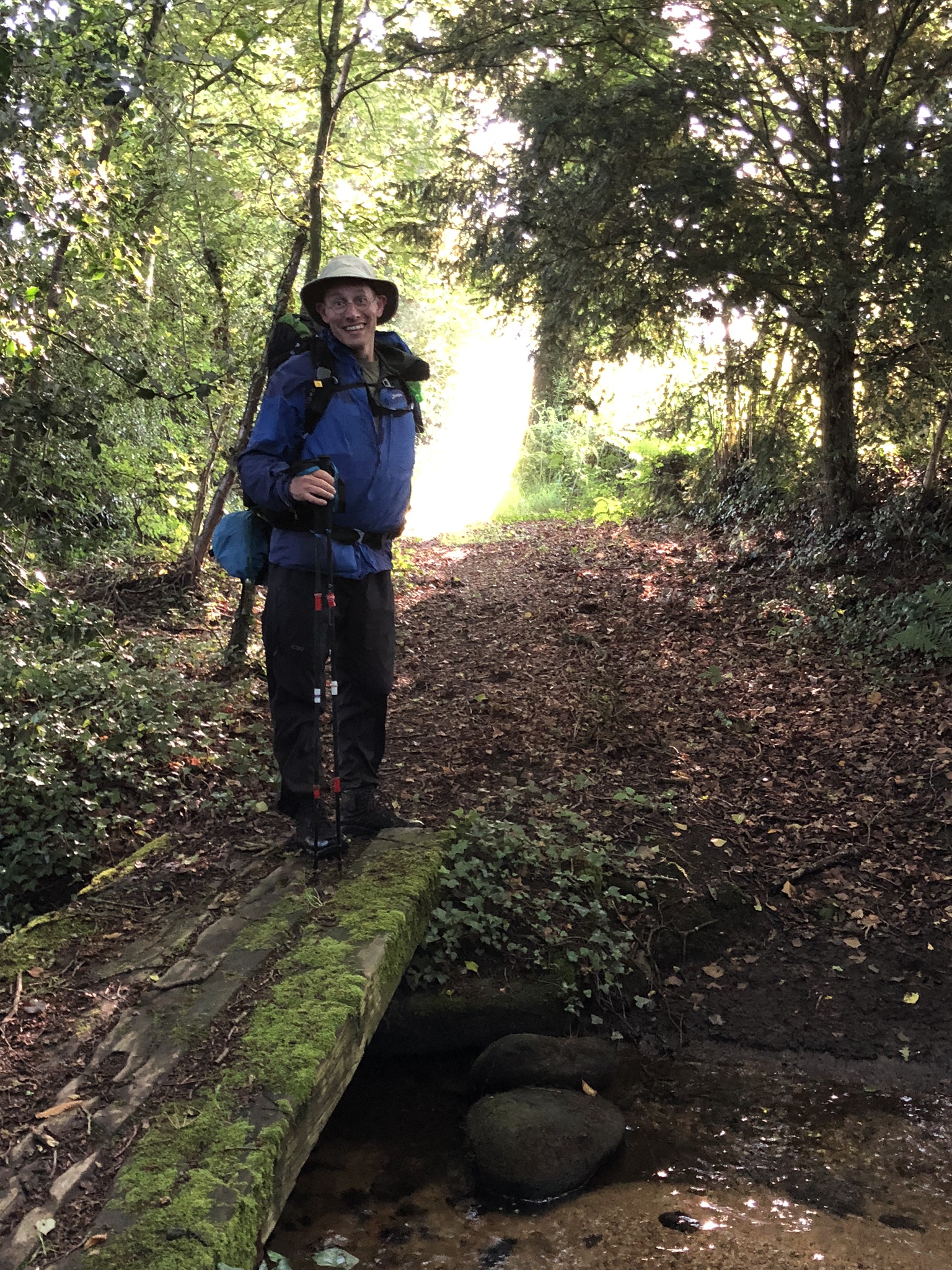 During our first week we had long days of walking because of the distances between towns. By day 6 we decided to ditch the trolley, it was just not trolley terrain. My sister came to collect it and from there we carried our packs – mine weighed 15kg and Fi’s 9kg. By the time we joined Julia in SJPDP mine weighed 9kg and Fi’s 7kg.

It was a week before we met another pilgrim on the trail. In fact, during the first 1,280km we only met four pilgrims and two of these were walking the Tro Breizh, a 600km circuit around Brittany. We did however meet fellow pilgrims who put us up for the night when we couldn’t get a campsite, hotel, Gîte or AirBnB. The pilgrim associations provide a list of people that will accommodate pilgrims and often they are former pilgrims themselves. This is the extent of the pilgrim infrastructure in France, at least where we walked. It’s important to give advance notice of your arrival, so my French-speaking sister, was a great help in calling accommodation venues. 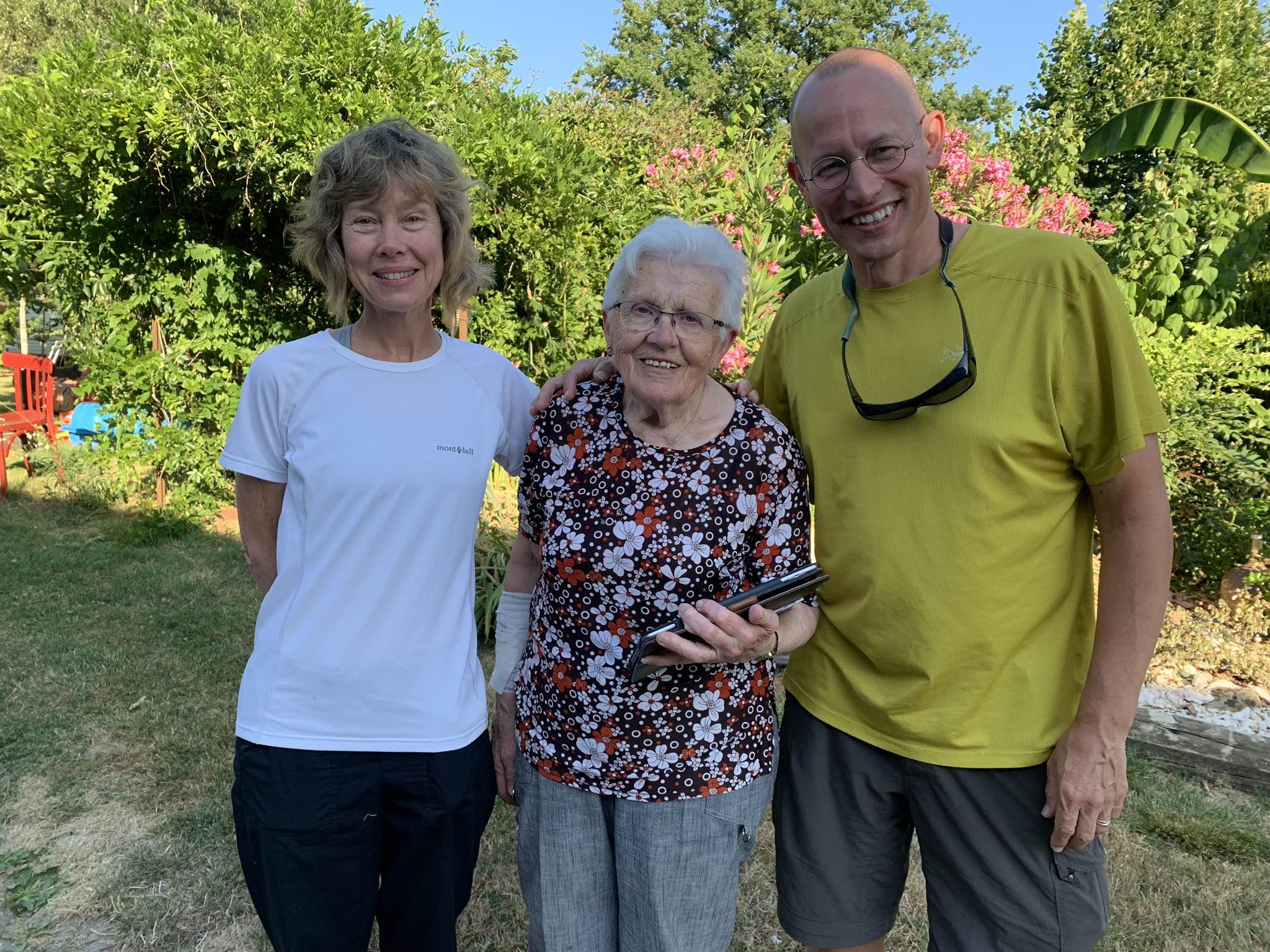 We met some lovely people this way although the language barrier was sometimes difficult. Madam Blanche is a widower in her 80’s that puts up pilgrims because she lives adjacent to the path in a particularly rural section with no other accommodation options. We communicated via a translation app on her tablet – it’s touching to meet these kind souls.

The local town hall can also be helpful in finding a place to stay. 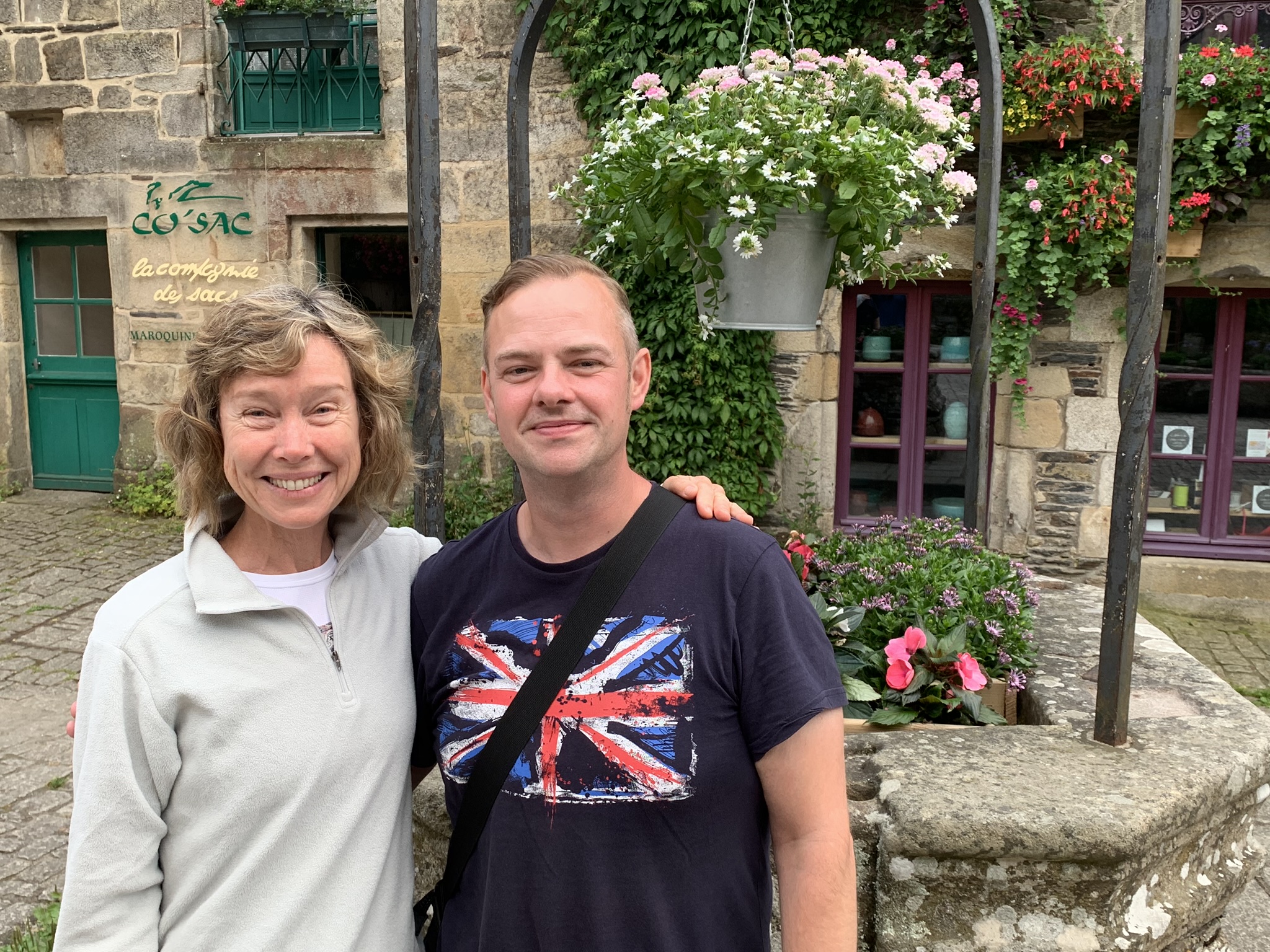 AirBnB is okay but it only shows a general location before you book, so you could end up walking further than you might like. We met James, a lovely English guy recently settled in Brittany, and we were his first AirBnB customers. He had some interesting stories to tell. Another great AirBnB host was with Dominique in Saint Michel le Cloucq. 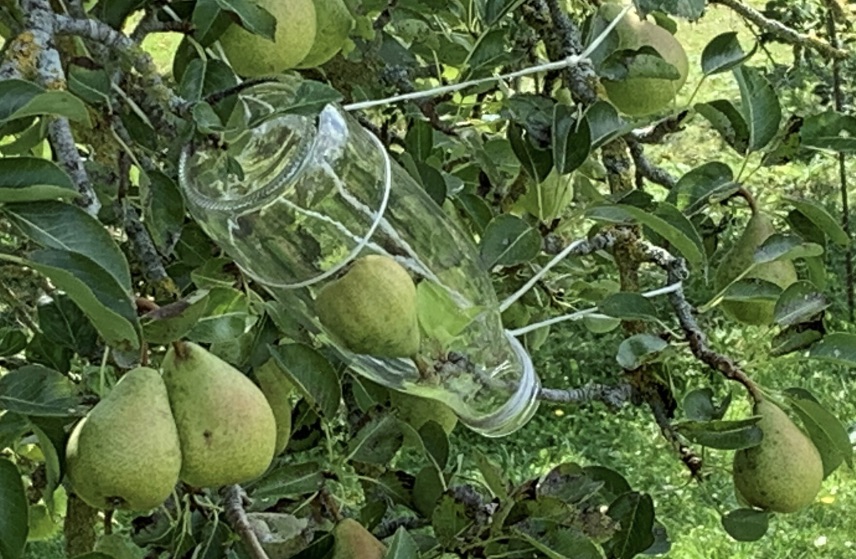 Dominique is an artist and we stayed in his beautiful barn conversion. With no shops or restaurants nearby, Dominique’s wife Sabine, fed us a lovely vegetarian meal and introduced us to pear snaps. I wondered how they got the pear inside the bottle. Later, in the Pyrénées, we saw pears growing inside bottles carefully tied to the tree. 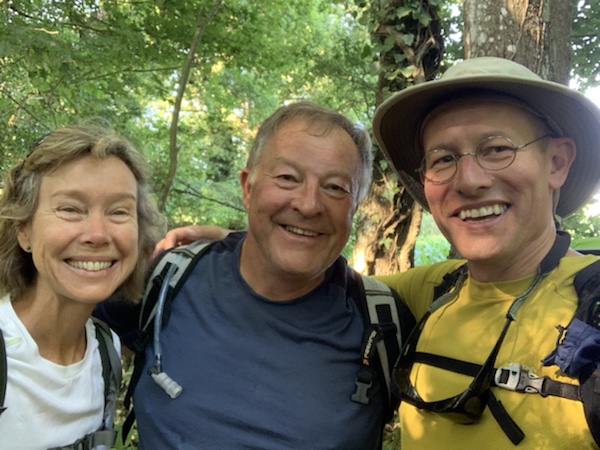 Monnières is the penultimate village before leaving Brittany and they offer a community Gîte just for pilgrims. Here we met Claude with whom I instantly clicked. He walks the Camino every day, albeit the same part over and over. It was the middle of a heat wave when we got to Monnières so we went for cold one at the local Tabac (the only place open) and met Charles who spoke English. The friendly crowd there bought us drinks all afternoon making it a day hard to forget but also hard to remember!

We didn’t plan our accommodation before leaving Australia and so would spend hours each night searching for places to stay. This was a major difference with the Spanish Camino where it’s easy to find a bed. Another difference with Spain is finding food. If we didn’t pass a town or village between noon and 2pm, restaurants and shops would be closed. We could usually find a bakery open early morning and so would carry enough for a meal or two, but once we went 2½ days without seeing a shop or restaurant. 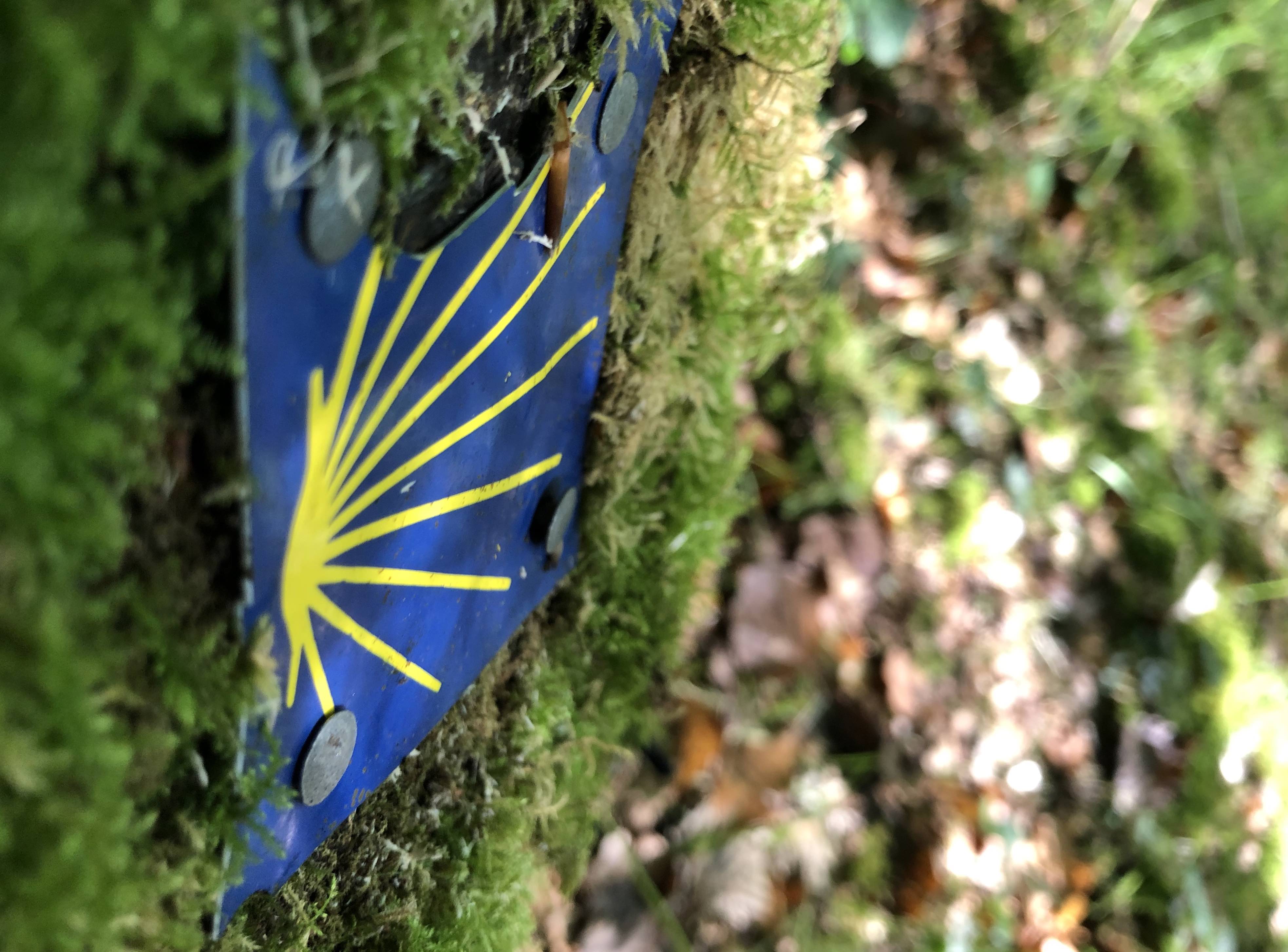 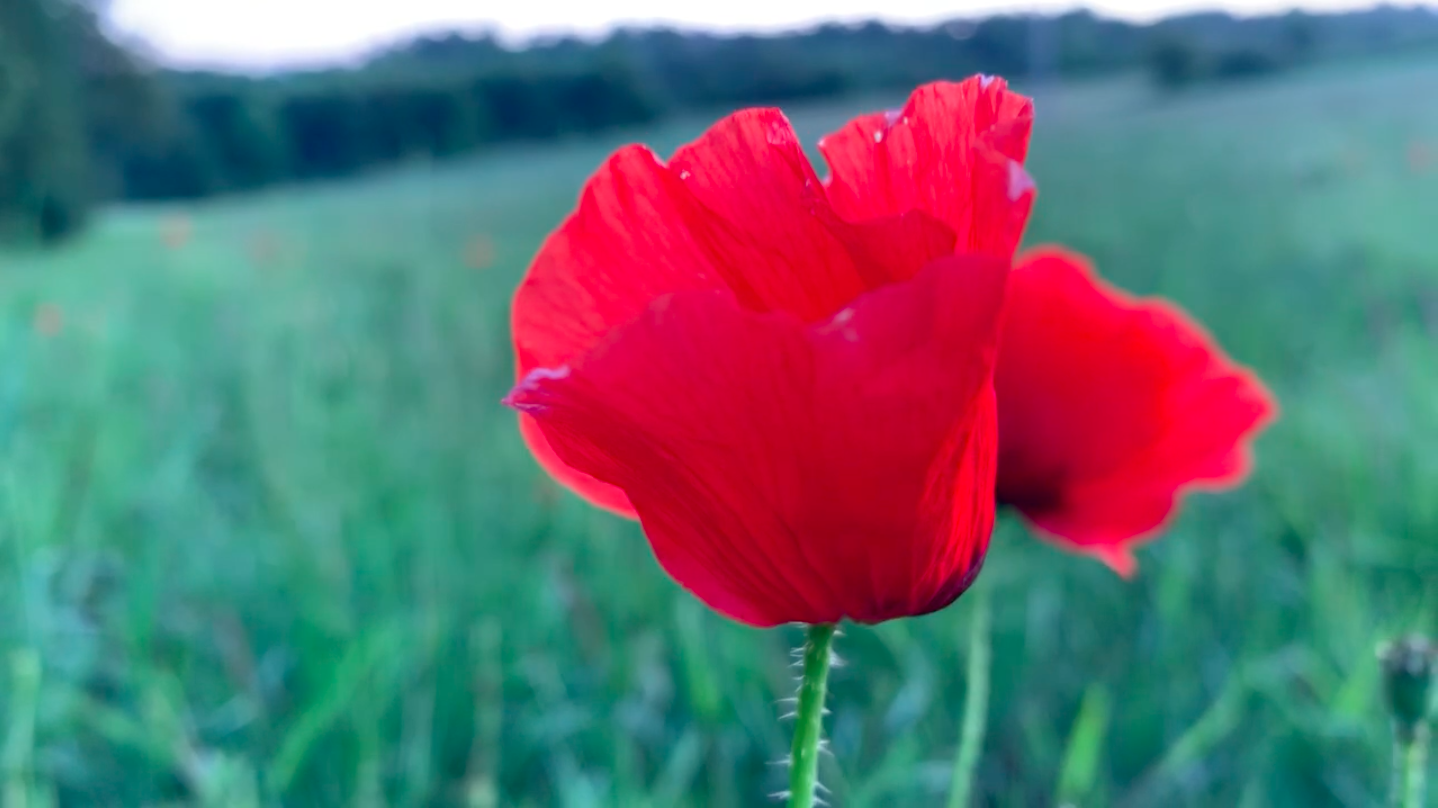 We walked 530km in Brittany and loved it. As we left behind the forests and fields of wildflowers, the stone buildings with slate roofs, and the abundant wildlife, we said hello to the wheat fields and canals of Vendée. The landscape became a lot flatter and the kilometers flew by. What seemed like a just a short week later we were walking out of Vendée and into Charente-Maritime.

After walking 740km it dawned on me that we had a long way to go to meet Julia in SJPDP in just 2½ weeks and at this rate we wouldn’t make it. I didn’t want to miss out on any of the journey, but I definitely didn’t want to miss walking through Spain with my sister. Our solution was to cycle some of the way to make up time. It would be self-powered and an opportunity to see the Atlantic coast of France, as we could follow the EuroVelo 1 (EV1) before heading East to the foothills of the Pyrénées. So we walked to Surgères, which is close to where my good friend Clive lives, and just 20km 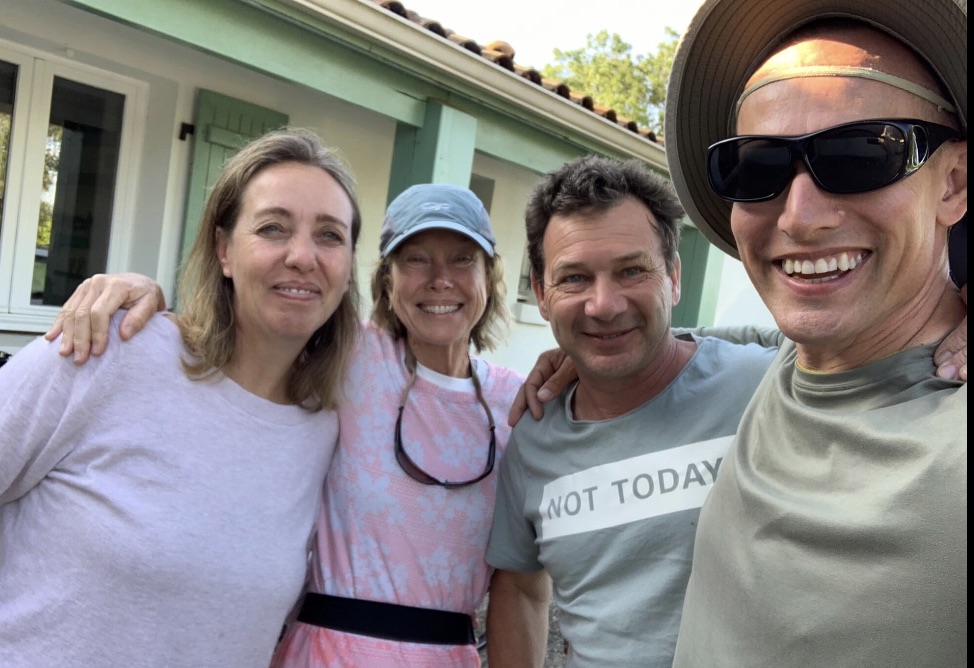 from La Rochelle where there’s a bicycle shop. I hadn’t seen Clive for 20 years, so it was fantastic to catch up and meet his family.

Europe was experiencing another heatwave as we set off on our bikes to follow the coast south. It had been some years since we had ridden so we sought the advice of Rowan at Glenella Guest House, who had previously cycled the Camino. He recommended panniers instead of wearing our backpacks, along with padded shorts to make hours in the saddle more comfortable! We cycled over 500km in 9 days. It was an interesting experience and overall enjoyable, but I prefer to see the world go by at walking pace. We did see a wild boar and also noticed that people on touring bicycles smiled more than those wearing Tour de France gear, maybe it’s down to the saddle? 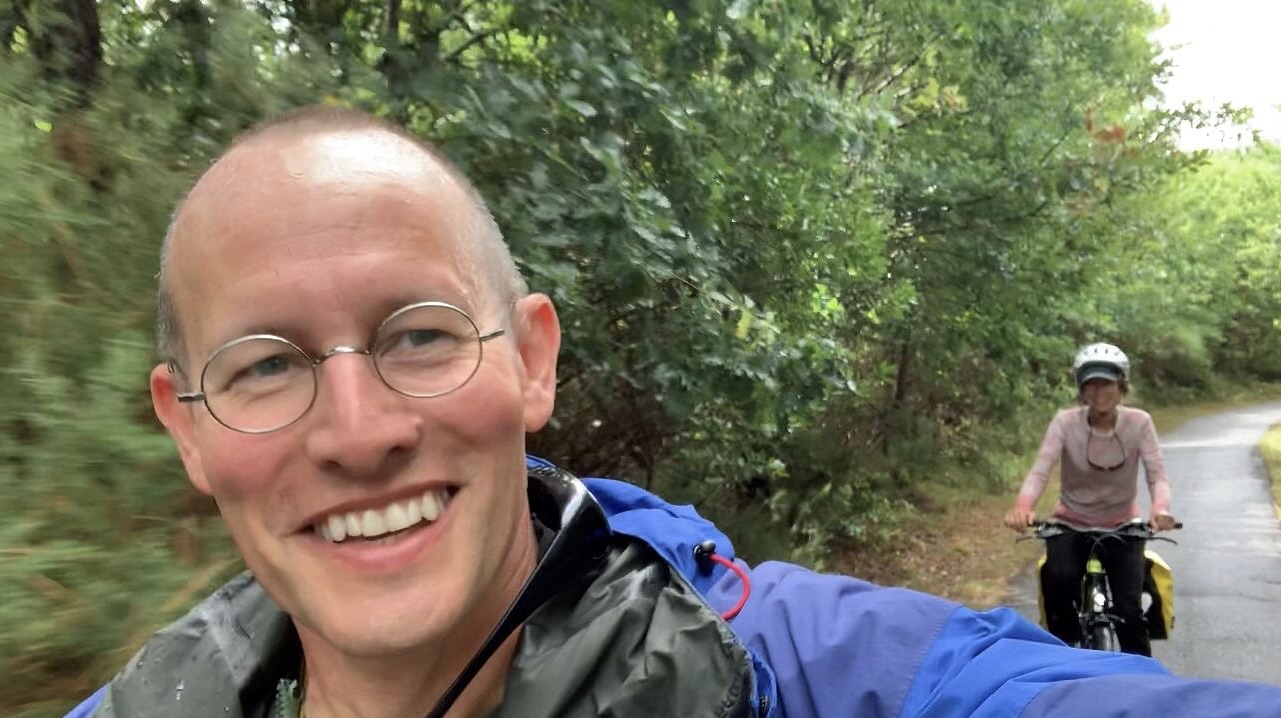 We left the EV1, which follows a lot of La Voie Littorale, at a small village called Leon and at the town of Dax connected with La Voie de Tours, the main Camino route from Paris. Here, Clive and his wife Aude made arrangements for us to courier the bikes back to my brother’s place in Brittany. We were walking again! Dax is a spa town at the foot of the Pyrénées so it started to get hilly from here.

It was now the beginning of August and we had 5 days to walk to SJPDP to meet Julia and her friend Sue. Pilgrim infrastructure began to increase as the Camino paths across France converged and the first albergues and donativo refreshment tables appeared. There were also fruit trees planted on the wayside by the Pyrénées-Alantiques Camino association, inviting pilgrims to pick a snack. Accommodation along this section was quite full which meant we ended up walking to SJPDP in 3 long days instead of 5. The scenery was stunning as we made our way deeper into the Pyrénées. Our hearts lifted as we reflected on our wonderful 1,400km journey through France and we savored the anticipation of ending the French chapter and starting the Spanish chapter (another 900km). 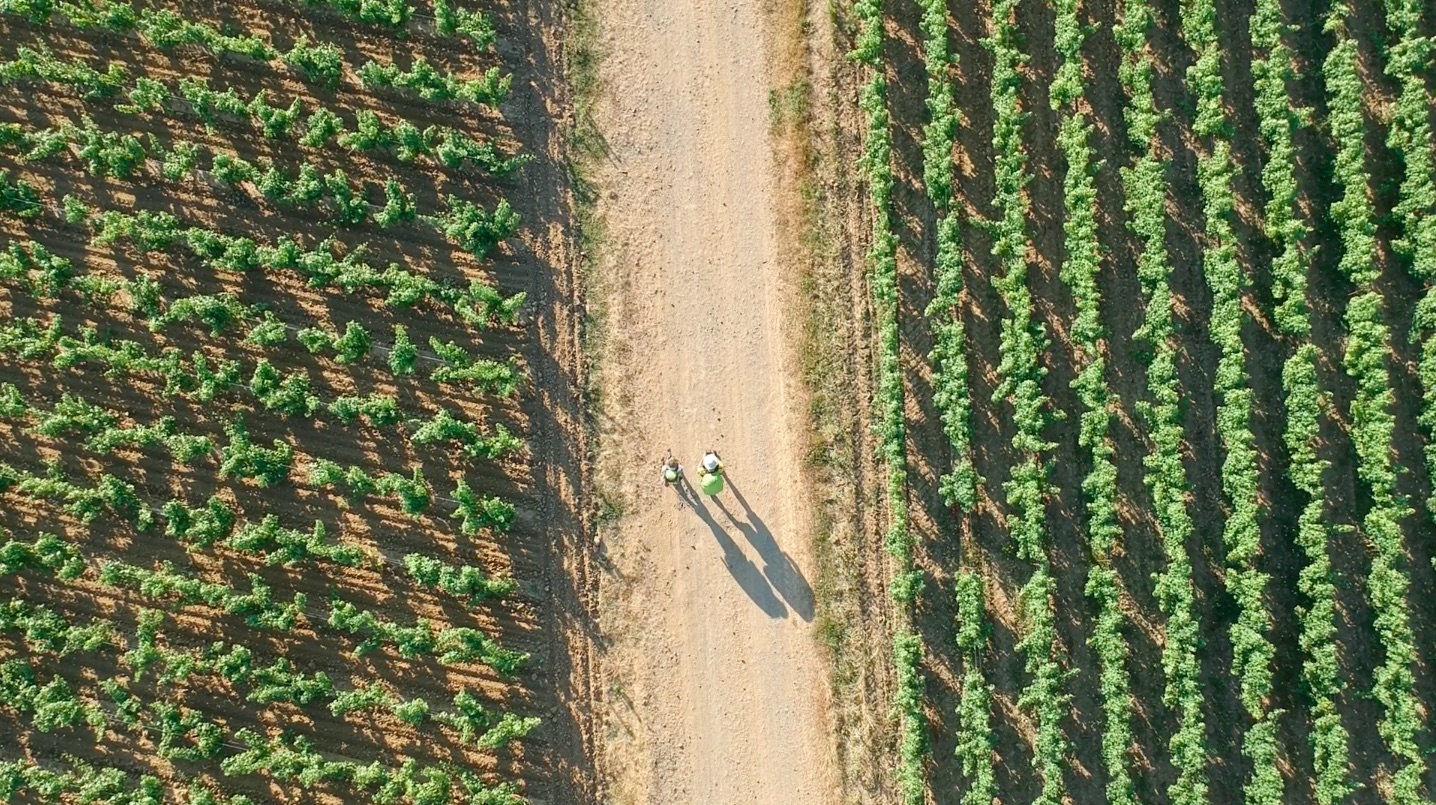 We had two rest days in SJPDP before greeting Julia and Sue in what seemed like a sea of pilgrims on the cobbled street near the pilgrim office. We would accompany them for the next two weeks to Burgos before they flew home, and I would see the Camino work its magic on them as they experienced the inner alchemy of walking towards oneself. It’s a beautiful journey and if you’ve walked the Camino you probably know what I mean.

The Spanish chapter is its own story, and spoiler alert, Fi & I have walked to the ends of the earth together (and we’d do it again). We recorded our journey on our phones and a drone, and I spent 3 hours each evening editing video to upload to YouTube. I did this for my parents, but I have greatly benefitted from our Vlog. On returning to work in Sydney I watch it at breakfast time to infuse the day with some Camino magic and lessen the withdrawal symptoms.

If you’d like to view our journey, our channel is called “Kinder Good” and for more practical insights, especially walking the Camino as a vegetarian, our blog is akinderway.wordpress.com. 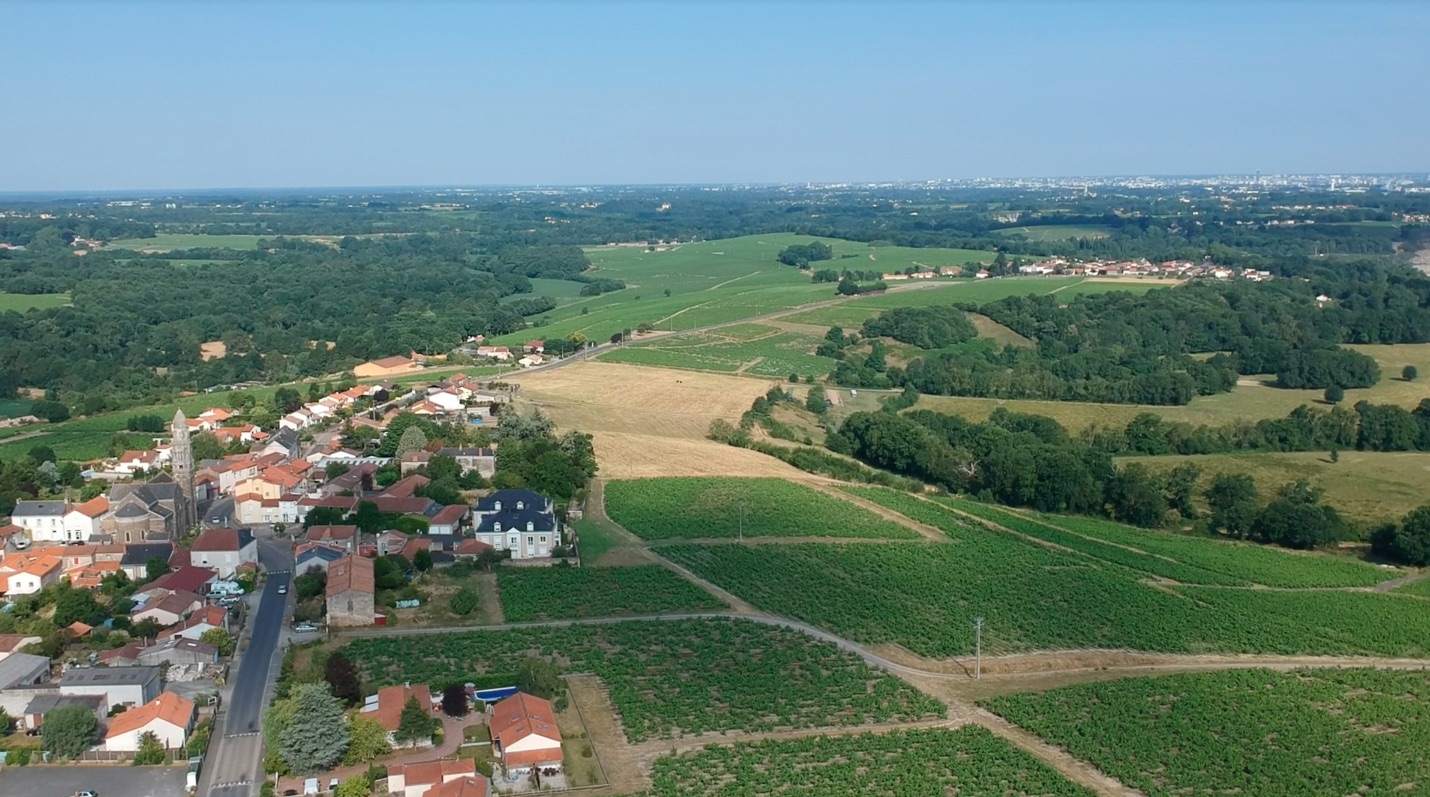